As a professional who has worked in the event/wedding industry for over 18 years I can say Tasa & Rob know how to entertain.  Their musical library seems endless, all the songs you want to hear and the ones you forgot you love are part of their catalogue.  Their unique style and presentation of music brings to life any crowd in any forum. They are true musicians with the passion for entertaining and should not be missed.  They understand the word professionalism; they arrive early, look great, stay late, and make sure everyone has a great time.  One good listen and you'll be hooked.  I highly recommend Tasa & Rob for any social gathering that music is required.


Dave and I were so happy and grateful to have Tasa + Rob perform at our wedding reception on October 8, 2016. It was fantastic!! Perfect! It was wonderful that they allowed us to choose a few of our favorite songs to learn.  Everything they did was GREAT! Our friends and family really loved their performance as well. We would love to someday ask Tasa + Rob to perform at another event.

We are so glad we found them!!

We first heard Tasa + Rob play at a local gig in Siesta Key, FL.  Their special chemistry, ability to keep the audience engaged, and of course how wonderful they sounded, immediately captured our attention.  Throughout the evening, we enjoyed hearing songs from many genres which were all beautifully performed with their own unique touch.  As we were leaving for the evening, we both agreed Tasa + Rob would be perfect for our wedding!They performed our ceremony, cocktail hour, and our first dance. The elegance of Tasa’s electric violin combined with Rob’s acoustic guitar rhythm made the acoustics in our ceremony truly beautiful.  When we mentioned our first dance song, Tenerife Sea, they even said they had learned it recently and played us a sneak peek months before the wedding.  It was beautiful with the violin as a romantic first dance with a personal touch.  We were so happy to have such a wonderful and talented couple be a part of our special day! Tasa + Rob are exceptional musicians and even better people.  We can’t wait to get back to Florida to hear them play again!
​
​Kaleb and Lindsay Holt

We're Tasa + Rob's new friends from Canada! My wife and I winter in Sarasota each year and only discovered them last night, at Walt's Tiki Bar. Sadly, it's time to head north to home, for the summer. However, before leaving, we decided on a night out with my brother, at a new venue (Walt's). We left Walt's last night, thinking we'd hit the jackpot! The meal and drinks were good but, the highlight of the evening, for us, was Tasa + Rob's performance. We really enjoyed the interaction with them both and their music & singing is fabulous. I've bookmarked their website and will look forward to enjoying many more evenings of their entertainment when we return in the fall.
Thanks for a wonderful evening!

My sister and her husband have lived in Marshfield for the past 26 years to the month.  They finally were able to buy their dream home on the ocean. To celebrate, they invited all of their friends and family to a cookout! As a housewarming gift, I decided to hire some entertainment… Tasa and Rob. I got their name as a reference from another entertainer, and they came highly recommended!! I couldn’t have gotten any luckier!! They came onto the porch, which over looked the ocean, and they looked & played the part of the beautiful ocean front venue.  Tasa+Rob entertained every age group from 21 to 55. Everyone sang and danced along to their music. Tasa played the violin beautifully and Rob was on the guitar!
​Between their instruments and their vocal talent, I honestly thought they made the whole gathering complete! Not only were they terrific entertainers... they never stopped… & they never took a break!! They were absolutely amazing!! They played and played, and then when it was time for them to stop, we didn’t want them to leave so they stayed another hour!!! To this day everyone talks about that night! The text messaging and facebook comments were nonstop...! We are hoping to plan this summer’s party around Tasa and Rob’s trip back to the Boston area!!! It won’t be the same unless they are here entertaining us.

What a blast!! We truly had so much fun, creating memories that will stay with us for a long time!!!
Thank you Tasa+Rob… You made me look like a Hero for finding and hiring you!!!​

Thanks so much for the music at Cha Cha Coconuts on Friday night.  We just loved you both... Great personalities and great talent.  What a soothingly, refreshing sound.  You guys did an awesome version of Wagon Wheel.  How can we get a cd?  Love the website too!

What a dynamic duo!  We love to come out to see you as often as we are in Sarasota.  Your harmonies are so beautiful, and we love hearing the sound of the violin with the guitar... What a great combo! 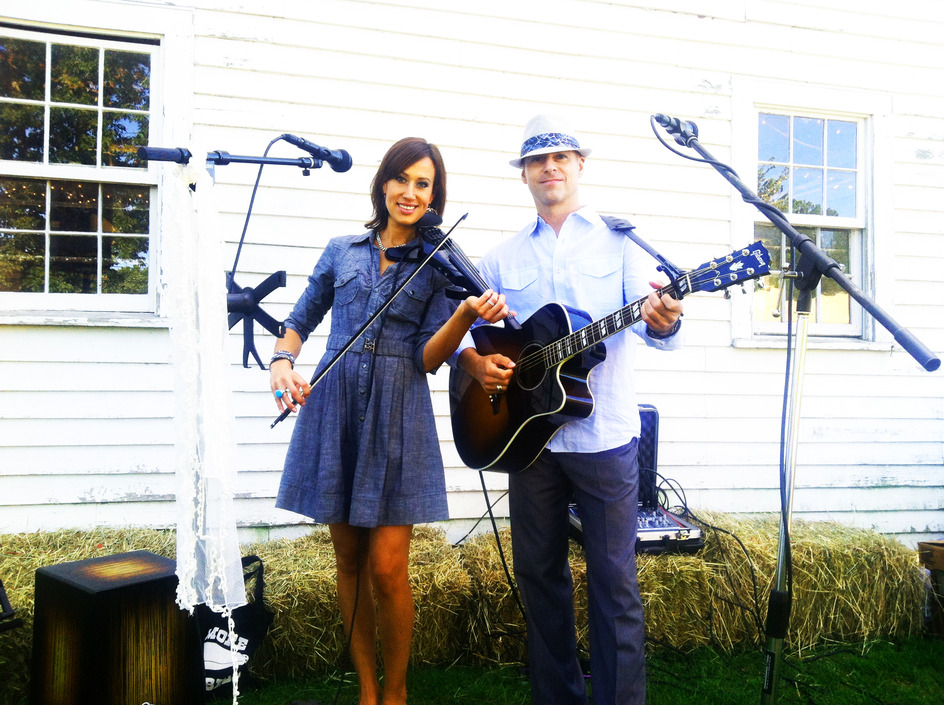